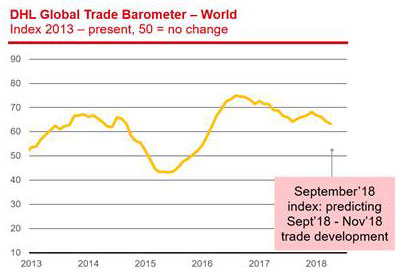 MIAMI – Global trade continues to grow, according to the latest three-months forecast by the DHL Global Trade Barometer (GTB). The index for global trade now stands at 63 points. This is a decline of four points on the previous quarter’s forecast, indicating an overall slightly slower pace of growth. In the GTB methodology, an index value above 50 indicates positive growth, while values below 50 indicate contraction.

The overall slight reduction is largely driven by lower growth rates of air trade: The respective index value declined by eight points to 62. In contrast, the growth rate for global ocean trade merely decreased by one point to 63 points. Regarding the GTB’s seven constituent countries, this quarter sees a mixed picture with a threefold differentiation: India as the only country with simultaneously increasing and very high prospects for trade growth, the UK with an unchanged outlook, and all other countries with slightly diminishing prospects.