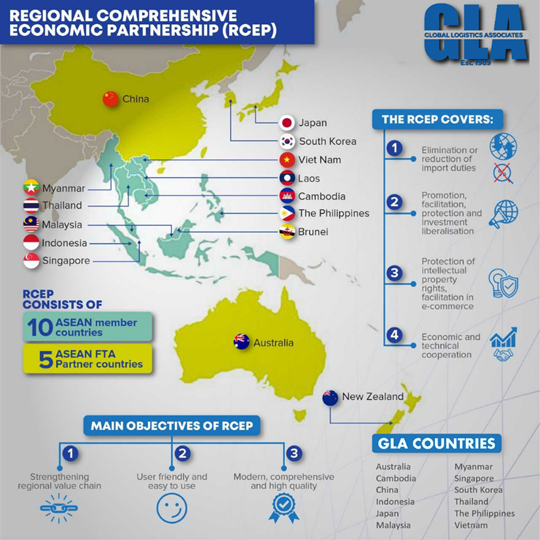 On November 15th, 2020, the 15 member countries remotely held a ceremony to sign the RCEP free trade agreement, unifying the pre-existing bilateral agreements between the 10-member ASEAN and five of its major trade partners.

Regional Comprehensive Economic Partnership is a proposed free trade partnership agreement which is launched by ASEAN countries and its six Asia-pacific free trade partners including China, Japan, Korea, India, Australia, New Zealand in 2012. After eight years of negotiation, the related parties reached a consensus and signed the agreement on Nov. 15.

Establish a modern, comprehensive, high-quality and mutually beneficial economic partnership that will facilitate the expansion of regional trade and investment and contribute to global economic growth and development. Accordingly, it will bring about market and employment opportunities to businesses and people in the markets covered. The establishment of RCEP aims to deepen the cooperation and strengthen the connection among the Asia pacific nations. Built upon the existing ASEAN nations and its Asia pacific free partners, RCEP is committed to boost trade and investment among those parties with the spirit of broadening cooperation.

Key statistics of 15 countries within RCEP:

The meaning of RCEP:

Globalization and international trade have driven global growth in the last few decades. Many countries have developed their economy by involving in global supply chain and benefit from multilateral trading system. In recent years, there is a continued rise in economic nationalism and unilateral trade actions around the globe. The evolving economic nationalism has a negative impact on global economy growth. Sanctions, Tariffs, quotas are the measures taken usually by some countries to trigger trade war. With the development of globalization in the last few decades, the world has become so interconnected. The global supply chains are involving so many different countries and critic concerns that any unilateral trade actions are devastating to global supply chains and do damage to economy growth. Thus, the signing of RCEP is a great victory of multilateral trading system and it will be beneficial to global economy and boost the confidence of global growth.

RCEP has the potential to deliver significant opportunities for businesses and help to facilitate economic integration in the East Asia region, given the fact that the 16 RCEP participating countries account for almost half of the world’s population; contribute about 30 per cent of global GDP and over a quarter of world exports. For one thing, RCEP will provide a framework aimed at lowering trade barriers and securing improved market access for goods and services for businesses in the region. Transparency in trade and investment will be improved and circulation of merchandise will be speed up, which will help to realize regional integration. For another thing, RCEP will provide a larger market to enterprises in the region. After the RCEP is signed, a modern, comprehensive, high-quality and mutually beneficial economic partnership that will facilitate the expansion of regional trade and investment is established and the unification of a larger market with the same trading treaties will greatly reduce the operation cost of enterprises and trade conflicts in the region.

RCEP is expected to exert profound impact on global and regional economy in the future because it is the free trade agreement that has the largest covering areas and the population in the world. RCEP is committed to eliminate tariff barriers and strength cooperation in order to boost trade among the Asia pacific nations. RCEP will bring about more business opportunities as well as more multilateral cooperation among the Asia pacific nations.